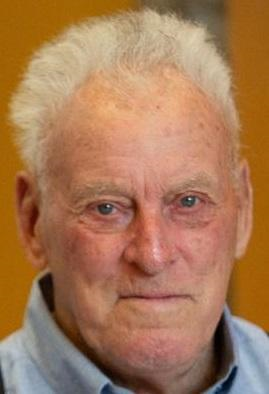 Please share a memory of Jesse to include in a keepsake book for family and friends.
View Tribute Book
GENEVA/VARICK – Jesse E. Jolly, 86, of Geneva/Varick, NY, passed away peacefully at his home Saturday (October 1, 2022). In keeping with Jesse's wishes, there will be no calling hours or service. In lieu of flowers, please consider donating to the Romulus Community Sports Boosters, 5705 State Route 96, Romulus, NY 14541. Jesse was born November 6, 1935, in Fayette, NY, the son of Alvah and Eva (Garlick) Jolly. He was an avid athlete at Romulus Central School and graduated in 1954. Jesse was a U.S. Army veteran, serving his country from 1955 to 1957. He married Laura A. Jolly on June 20, 1959 and later celebrated 62 years of marriage. He retired after 33 years of employment at the Willard Psychiatric Hospital as the grounds maintenance. Even though he was retired, Jesse enjoyed working many years with his son Jeff at Jolly Masonry. He was a life member of the South Seneca Sportsman's Club and also, the Varick Volunteer Fire Department. Jesse was an avid hunter, fisherman and outdoor sportsman. He took pride in his children and grandchildren's sporting events. He enjoyed supporting the entire Romulus community, especially at basketball games. Jesse loved watching the NY Mets, NASCAR and traveling to the races with his wife in their motorhome. For 30 years they spent winters in Florida and they especially enjoyed their trip to Alaska. During summers they planned many camping trips with their grandchildren. He had an incredible sense of humor calling himself the "mayor" of Yale Station Road. He cracked a joke with everyone that he met, making them laugh, and leaving a lasting impression. He is survived by his son Jeffrey (Yvonne) Jolly of Geneva, NY; daughter Tammy von Hahmann of Geneva, NY; four grandchildren Taylor (Sam) Rollo, Paige (Ryan Juergens) Jolly, Cortney (Reik Laubenstein) von Hahmann, and Danielle (Kyle) Christie; great-grandchildren Zoe von Hahmann and Gavin Christie; and many nieces and nephews. We will forever miss our poppie. Jesse was predeceased by his beloved wife Laura A. Jolly; son-in-law Karl von Hahmann; and siblings Edna Jones, Alvin Jolly, Byron Jolly, Joyce Smith, and Marlene Jolly. Condolences and remembrances may be sent to www.coegenungfuneralhome.com
To plant a beautiful memorial tree in memory of Jesse Jolly, please visit our Tree Store

Look inside to read what others have shared
Family and friends are coming together online to create a special keepsake. Every memory left on the online obituary will be automatically included in this book.
View Tribute Book
Services for Jesse Jolly
There are no events scheduled. You can still show your support by planting a tree in memory of Jesse Jolly.
Plant a tree in memory of Jesse