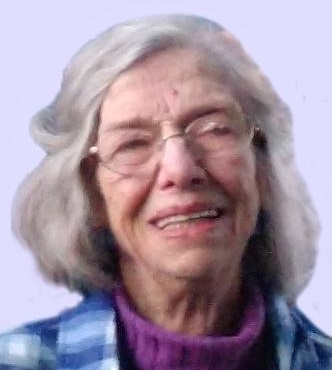 Please share a memory of Martha to include in a keepsake book for family and friends.
View Tribute Book
SENECA FALLS - Martha was born fearless and asking questions. She was an avid consumer of the written word in any form and an absolute news junkie, passions that superseded even her love of coffee, cigarettes, gardening, and seafood. This was proudly evidenced in every aspect of her life – teacher, artist, wordsmith, nature lover, and mother. Martha Genevieve Warner Hadley was born April 23, 1931 in Far Rockaway, NY, the daughter of Stanley F. and Genevieve A. Smith Warner. She was raised on Long Island where her childhood was spent climbing trees and reading books. At 9 years old she was allowed to travel alone by train to soak up the wonders of Manhattan's libraries and museums. She learned how to play the piano beautifully. In later years, she found her mate, Don, at a summer cottage on the shores of Cayuga lake. Marty studied music at Syracuse University before transferring to Cornell, where she enrolled in Home Economics, specifically enjoying dress design and pattern making. After marrying June 9, 1951, she and Don lived in locations from Maine to Texas during his service in the US Air Force before settling in Seneca Falls. A fiercely independent lady, Martha enrolled with Empire State College and soon gained a position as the vocal music instructor at Cayuga Elementary and Union Springs High Schools, and later taught music theory and choral arts at Mynderse Academy. Through her constant urging, each of these programs adopted musical theatre productions which she produced. Never a one-trick pony, Martha went on to become editor and reporter for The Reveille for many years. She was a founding member of the local 4H and Seneca Landmark Association. On top of all this, she also dedicated time to direct the Seneca Falls Presbyterian Choir. After the dissolution of her marriage, Martha moved to Portugal and researched women's studies in the culture for three years. Upon her return to Seneca Falls, she bought a house on Center Street where she played and taught piano, tended gardens, and read everything she could get her hands on. She was devoted to her fellow Myndwich members and enjoyed the company of friends at the moveable feast of Supper Club. She took delight in doing the Sunday NY Times crossword in ink, and in writing poetry, letters to the editor, and family genealogy. She became an unceasing champion of women's and environmental rights. She watched with pride as generations of grandchildren arrived to expand her family. Martha's beloved home caught fire in June of 2019, at which time she moved in with her son on Fall Street. Ever adaptable, she soon grew to love life there as she met new friends and neighbors. And it was there that she died peacefully on October 29, 2021. After living life on her own terms, Martha is survived by her daughter Allison Hadley of Waterloo, NY; sons Mark (Dawn) Hadley and Simon Hadley of Seneca Falls, NY; seven grandchildren: Sarah, Bryan (Rose), Patricia (Ryan), David, Joshua, Rachel (Zac), and Laura (Anthony); nine great-grandchildren: Matthew, Nicolas, Hunter, Conner, Penelope, Alexandria, Sean, Noah, and Oliver; three great-great-grandchildren Veyda, Kylie, and Bailey; her cousin Sharon Smith Carty; and many nieces and nephews. She was predeceased by her son, Jason Andrew Hadley, brother Stephen Warner, and sister Joan Fogg, and former husband Don Hadley. A Celebration of Life will be held at the First Presbyterian Church, 23 Cayuga Street, Seneca Falls on November 27 from 2pm to 5pm. In lieu of flowers, Martha requested donations be made to the Seneca Falls Library, 47 Cayuga Street. Condolences and remembrances may be sent to www.coegenungfuneralhome.com.
To plant a beautiful memorial tree in memory of Martha Hadley, please visit our Tree Store

Look inside to read what others have shared
Family and friends are coming together online to create a special keepsake. Every memory left on the online obituary will be automatically included in this book.
View Tribute Book
Services for Martha Hadley
There are no events scheduled. You can still show your support by planting a tree in memory of Martha Hadley.
Plant a tree in memory of Martha