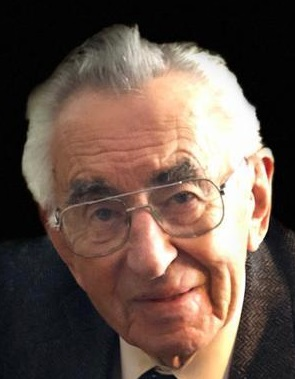 Please share a memory of Bernard "Peel" to include in a keepsake book for family and friends.
View Tribute Book
VARICK/WATERLOO – Bernard "Peel" Joseph Long, 96, was surrounded by family as he peacefully went home to be with the Lord, Saturday, August 28, 2021, at Huntington Living Center, Waterloo, NY. In keeping with the family wishes, there will be no calling hours. A memorial service will be held Tuesday, Sept. 21, at 3 p.m. at the Waterloo Baptist Church, 2701 NY-96, Waterloo, NY. Rev. Barry Somerville, pastor of Finger Lakes Baptist Church and nephew of Bernie, will officiate. Burial will be in Maple Grove Cemetery, Waterloo, NY, at the convenience of the family. In lieu of flowers, memorial contributions may be made to Huntington Living Center, ATTN: Deb Lockett, 369 E. Main St., Waterloo, NY, 13165. The money raised will assist Bernie's family with renovating the deck off the first floor social/day activity room at Huntington Living Center, Waterloo, NY. Bernie (Peel) was born Nov. 1, 1924, in Geneva, NY, the son of Warren T. and Ruth J. (Hutchinson) Long. He was a 1942 graduate of Romulus High School. In the years following, he was recruited to try out for the St. Louis Cardinals as a pitcher. After those tryouts, he returned home and married his high school sweetheart, Annette Hudson. He served as a sergeant in the U.S. Army during the Korean War and was stationed in Japan. He retired after 31 years as a barber for Willard Psychiatric Center as well as owning his own barber shop on Route 96A. After retiring, he spent many years working with his brother-in-law on the Hudson farm. Bernie was an avid fisherman, hunter, and trapper, and kept records for many years for the NYS DEC related to the health of lake trout in Seneca Lake. Many knew Bernie as a dedicated wandering minstrel, playing his guitar and singing for many area senior centers and nursing facilities in the Finger Lakes area for over 35 years. His love for his community was expressed in many ways. Bernie was a lifelong member of the Varick Volunteer Fire Dept. He served as one of the sextons of the West Fayette Cemetery for many years. He was a very active member of the West Fayette Presbyterian Church and after moving to Waterloo, was a member of the Waterloo Baptist Church. Bernie was selected as Seneca County Outstanding Senior Citizen of the Year in 1999. Bernie's love for God was reflected in so many ways throughout his life, and he will be deeply missed. He is survived by his loving wife Gloria, whom he married January 12, 2002; daughter Beth (Doni) LaRock of Brockport, NY; son Warren "Bernie" (Terri) Long of Varick, NY; daughter-in-law Rhona Long of Champaign, IL; grandchildren Meghan, Wanda, Elaine, Emma, Evan, Kristie, and Kristen; ten great-grandchildren; one great-great granddaughter; stepsons Bill (Pam) Davis of Honeoye, NY; Timothy Davis of FL; Jeffrey (Wanda) Davis of Romulus, NY; Mark (Heidi) Davis of Waterloo, NY; step-grandchildren Vanessa, Zachary, Ryan, Aaron, and Tyler; five step-great grandchildren; sister-in-law Dorothea "Feedie" Somerville of Fayette, NY; many nieces and nephews. Bernie was predeceased by his parents, first wife Annette Hudson Long; son Bernard "Jody" Joseph Long, Jr., and brother Raymond "Jake" Long. Condolences and remembrances for the family may be sent to www.coegenungfuneralhome.com.
To send flowers to the family or plant a tree in memory of Bernard "Peel" Long, please visit Tribute Store
Print
Tuesday
21
September