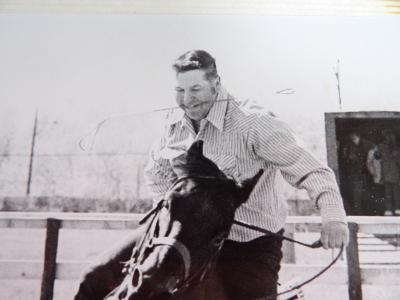 Please share a memory of Edward to include in a keepsake book for family and friends.
View Tribute Book
WATERLOO/JUNIUS – Edward Lewis Cooley, 81, of Gassner Rd., Waterloo, NY, passed away at his home, Monday (September 7, 2020) with loving family by his side. Friends may call from 5 to 7 p.m. Friday (Sept. 11) at Coe-Genung Funeral Home. Those attending calling hours MUST where face masks and enter the funeral home through the parking lot doors and leave through the Main St. doors. The graveside service will be 10 a.m. Saturday (Sept. 12) at Maple Grove Cemetery, Waterloo, NY. In lieu of flowers, memorial contributions may be made to Beverly's Animal Shelter, 50 E. River St., Waterloo, NY, 13165. Ed was born Oct. 6, 1938, in Waterloo, NY, the son of Lewis and Myrtle Green Cooley. He lived in Waterloo/Junius area all of his life. He was an avid horse lover and participated in many horse shows all over the country. He worked at Seneca Motor Co., Porterway Harvester, and Bill Crams as a body repairman. He was also a part time farmer. He is survived by his sisters Sandra Fritz of Farwell, MI and Denise Cooley of Waterloo, NY; brothers Albert Cooley of Newark, NY, Thomas (Marion) Cooley and Walter Cooley both of Waterloo, NY, Clifford Cooley of N. Rose, NY, Jack (LeighAnn) Cooley of Oswego, NY. He is also survived by his son Mark Cooley and daughter Robin Spoor; grandchildren Michael Cooley, Steven Cooley, Nerissa Fantley and Jace Spoor, several great-grandchildren; and several nieces and nephews. Edward leaves many good friends. Ed was predeceased by his beloved wife Loretta L. Cooley; his parents; sister June Bennett; sisters-in-law Donna Cooley and Jane Cooley. Condolences for the family may be sent to www.coegenungfuneralhome.com.
To send flowers to the family or plant a tree in memory of Edward Cooley, please visit Tribute Store
Friday
11
September