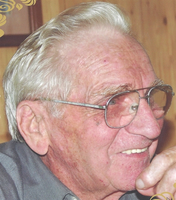 Junius/Phelps – Frank J. Seitz, 92, passed away peacefully at his home Monday (May 18, 2020). In keeping with the wishes of the family, there will be no calling hours. A graveside service will be at the convenience of the family in St. Mary's Catholic Cemetery, Waterloo, NY. In lieu of flowers, memorial contributions may be made to St. Mary's Catholic Church, 25 Center St., Waterloo, NY, 13165 or Alzheimer's Association, 435 E. Henrietta Rd., Rochester, NY, 14620. Frank was born July 18, 1927, in Kronwinkel, Germany, the son of Anton and Johanna Maier Seitz. While in school and college he worked on his family's farm in Kronwinkel, Germany. After Frank and Leonie married and the births of their three older sons, the family moved to the U.S. in 1956. Frank and Leonie rented a couple of farms for 6 years in Putnam and Dutchess Counties before they moved their family in 1968 to Junius to buy their family farm. Those who knew Frank knew of his strong work ethic and that he knew the value of hard work. He was a member Seneca County Farm Bureau. Frank was a member of the Junius Volunteer Fire Department. While farming he received three Dairy Farm Distinction Awards. He was a communicant of St. Mary's Catholic Church. He is survived by his wife of 67 years, Leonie Wodecki Seitz; sons Raymond (Christina) Seitz of Waterloo, NY, Bernhard Seitz of Batavia, NY, Frank J. Seitz, Jr. of Phelps, NY, and Martin of Waterloo, NY; grandchildren, Thomas Seitz, Nikky (Chris) Contini, Jade Seitz, Amanda (Thomas) Cunningham, Martin, Jr. (Eonji) Seitz, Leandra Seitz, Erik Seitz, and Kaitlyn (Anthony) Cipra; great-grandchildren Ellie and Chloe Contini and Ryan Cipra; brother Alfred (Brigitte) Seitz of Kronwinkel, Germany; sister Rosa (Edward) Miller of Tannhein, Germany; and many nieces and nephews. Frank was predeceased by his parents; son Peter Seitz; and sister, Rita Reisch. Condolences for the family may be sent to www.coegenungfuneralhome.com.