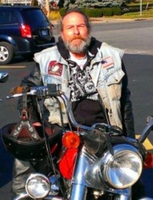 Waterloo – Robert H. "Woody" Wood, Sr., 68, died Monday (March 16, 2020) at his home. A Celebration of Life will be announced at a later date. In lieu of flowers, memorial contributions may be made to Wounded Warriors in Action, 330 Pauls Drive, Brandon, FL, 33511 – WWIA Memorial Donations. Woody was born Dec. 5, 1951, in Syracuse, NY, the son of Harold A. and Jane E. Jones Wood. He served in the U. S. Army from 1969 to 1970. Woody was employed during his life with different companies. He was a dedicated member of the local VFW and rode his Harley Davidson with the American Legion Riders. His children describe their father as one of a kind. He was loving, kind, stubborn, funny and handsome. He was a fiercely loving grandfather and worked hard until his last day. While marching to the beat of his own drum, Woody touched more lives than can possibly be imagined. While missing their father, they can hear his laugh in their hearts and feel his presence. Woody is survived by his daughter Sara L. (Corey Bain) Wood of Blaine, MN; son Robert H. Wood, Jr. of Penn Yan, NY; grandchildren Alexa J. Wood, Finnley C. Bain, and Austin R. Wood; brother John H. (Joanne) Wood of Seneca Falls, NY; brother-in-law William Vogt of FL; many nieces and nephews. He was predeceased by his parents; sisters Katherine Vogt and Jeanne McCann and Jeanne's husband Richard. Condolences for the family may be sent to www.coegenungfuneralhome.com.